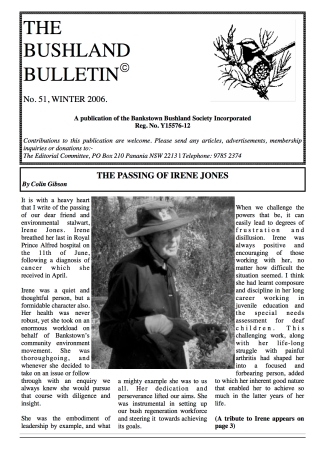 When Irene Jones quietly attached herself to our committee as Assistant Treasurer at the AGM in 1996, none of us had any idea what a force she would soon become, nor of the important role she would play as an environmental advocate for Bankstown and south west Sydney. She was a latecomer to environmental activism; having retired about 199, her first involvement with local environment issues was with the Davies Road Action Group which formed in 1993. Resulting from her involvement with this group she met Bushland Society member and fellow Salt Pan Creek resident the late Bunty Oldmeadow, who encouraged her to join. Bunty told her that our meetings were a bit of a mess, but that our speakers nights and outings were worthwhile. So Irene came along.

Soon after Irene joined we became embroiled in the expansion of the Chullora Freight Terminal which became the focus of a Commission of Inquiry. Several new tracks were to cut through an area we called Freshwater Creek Bushland (actually the above tidal-influence, upper section of Cooks River). We wanted the new tracks situated on the northern side of the creek adjoining the Regents Park goods line, but the Commissioner found that this could not justify the extra cost and the project went ahead as planned, destroying the bushland in the process. This was a very difficult issue for us and we were all impressed with how Irene remained steady and dependable throughout.

Despite her late entry into environmental activism, Irene already possessed formidable administrative skills, and was to boot a fast learner and an excellent communicator. She knew that putting as strong a case as possible, and establishing contacts with sympathetic people was the name of the game. She connected us all, facilitating the exchange of information and ideas through meetings, outings, letters, press-releases, articles, submissions and goodness knows how many thousands of phone conservations and emails. We were never far from the next thing we needed to know, with Irene around.

Irene and I collaborated on winning grants for bush regeneration projects, and I’m sure that her purposeful communications with agencies such as the Environmental Trusts, Southern Sydney Catchment Authority and National Landcare led to the success we’ve had. Irene herself had learnt a lot from her long-running and fruitless attempt to win funding for wetland restoration at Cutting Reserve along Salt Pan Creek. Her efforts there deserved better reward.

In the late 1990s she provided valuable assistance to Maree Ledson and David West helping win important grants for Norfolk Reserve and Freshwater Creek at upper Cooks River. She and I would eventually develop a formula that resulted in six successful applications in the space of three years, for regeneration of some of the rarest bushland habitats in Bankstown, and in Sydney for that matter. Irene had the capacity and motivation to administer these grants as a contribution in-kind on behalf of the Society, thus improving the ecological value of the results achieved. This is not only rare, but I’m sure it is unique among community groups in New South Wales, as I have been told.

When most people of her age retire they are looking forward to the club and the lounge. Irene however was a true community co-operativist, and in the last few years of her life as her knowledge of environmentalism increased I believe she was only just hitting her stride. She seemed to be everywhere attending meetings and committees: Bankstown Bushland Society, South West Enviro Centre, Revesby Community Action Group, Padstow Progress Association, Botany Bay and Catchment Alliance, Georges River Environmental Alliance, No Port Enfield Community Action Group, Bankstown Airport Consultative Committee, Chullora Waste Station Committee, – as well as addressing council at business meetings over issues such as urban development, tree preservation and the re-categorization of community land.

One of her most passionate aims was to see an environment centre established in south-western Sydney, and to this end she was a founding participant and staunch supporter of South West Enviro Centre, which was conceived at a meeting convened by BBS in May 1998. She left no stone unturned in her search for funding options for such a centre, a hard trail that yielded little, but not at any stage was her faith in the concept diminished, as she full realised the benefit that such a facility would provide in the long run to the community. South West Enviro Centre continues this commitment.

Another skill she acquired late in life was hands on bush regeneration. As she rarely missed a meeting, she rarely missed an outing or an activity. She spent countless hours in the field with our volunteers and grant teams. She was a firm supporter of council’ s bushcare commitment, particularly at Padstow Park which she adopted as one of her special places. Like all of us with the bush regen bug she loved getting involved and making a difference, and how happy we are to have so many memories of her enjoying our precious bushland as she contributed purposefully to its protection and improvement.

We have lost our good friend and the sadness is deep, but she has given us plenty of inspiration to go forward with, and our pride is great in that we were privileged to know and work with such a special person. We salute her memory and her legacy of a better environment for our community.